Distinctive basement gneisses of the Glenroy Complex and granitoids of the Mt. Cann Pluton and McKnee Intrusives are exposed in the Alpine Fault footwall, southeast Nelson, New Zealand. These rocks comprise tectonic blocks that form a foreland thrust system that has developed adjacent to a major restraining bend (“Big Bend”) in the Alpine Fault. The age of the Big Bend and its influence on exhumation of the Australian Plate are poorly constrained. This thesis addresses this issue through integration of conventional thermobarometry, U-Pb geochronology, and 40Ar/39Ar and fission-track thermochronology.

The Glenroy Complex was intruded between 127.9–121.6 Ma and metamorphism occurred at 120.6 ± 0.9 Ma. Emplacement of the McKnee Intrusives occurred in two discrete episodes at 224.8 ± 2.6 Ma and 137.8 ± 0.7 Ma. These ages, in combination with whole-rock geochemistry, suggest that the McKnee Intrusives, Glenroy Complex and Mt. Cann Pluton are correlatives of the calc-alkaline Darran Suite, HiSY Western Fiordland Orthogneiss (WFO), and HiSY Separation Point Granite, respectively. Thus, the McKnee Intrusives and Woodham Orthogneiss have been displaced ~500 km along the Alpine Fault, while the Mt. Cann Pluton is autochthonous basement over which the former units have been tectonically emplaced. Using the Woodham Orthogneiss and WFO as piercing points, a slip-rate of 22–25 mm/year is calculated for the Alpine Fault, which overlaps existing long- and short-term estimates. This suggests that the Alpine Fault slip-rate has been approximately consistent for ~23 Ma.

After partial exhumation during mid-Cretaceous continental extension, which preceded rifting of New Zealand from Pacific Gondwana, the Glenroy Complex remained at ~350 °C from ~100–80 Ma. During Late Cretaceous–Middle Eocene continental extension, the Glenroy Complex was dissected by normal faults, which initiated cooling below ~350 °C at 16–28 °C/Ma. Faults in the western Glenroy Complex were active earlier than those in the east. Consequently, the Woodham Orthogneiss experienced differential exhumation – western and eastern parts cooled from ~350–200 °C between ~80–70 Ma and ~50–45 Ma, respectively. After reaching ~200 °C, the temperature-time paths of the Glenroy Complex began to converge, because differential exhumation was no longer occurring, and cooling slowed to ~4 °C/Ma, which lead to surface exposure at ~15 Ma. The slow, consistent cooling rate suggests that the Big Bend had not yet formed. Development of the Big Bend during the Middle Miocene resulted in exhumation of the Alpine Fault hanging wall, which loaded the Australian Plate creating a foreland basin. Hence, shortly after reaching the surface, the Glenroy Complex was buried by ~3 km of sediments, which caused rapid (~44 °C/Ma) reheating to ~80 °C that lasted for ~4 Ma, causing partial annealing of apatite fission tracks. A need to accommodate shortening associated with the Big Bend resulted in the Glenroy Complex being thrust over the foreland basin eastern margin during the Late Miocene–Early Pliocene. 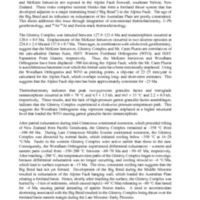