Introduction
This thesis is an account of the geology of approximately 75 square miles on the coast of South-East Otago, about 50 miles south-west of Dunedin. It covers the land between the margin of Owaka Valley in the north and Tahakopa River in the south. The railway-line between Owaka ad Tahakopa is the approximate north-western boundary. The Catlins District is the local name applied to the area mentioned above, and is named after Captain E. Catlin, an early settler of the district. The relative position and communications of the district to main centres of the southern part of the South Island of New Zealand, is shown in Text-fig. 1. 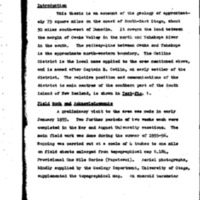