Mt Morning is a 2723 m high, undissected, mainly basanitic volcano with trachytic and phonolitic assemblages. It is located 92 km southwest of Scott Base, at the foothills of the Royal Society Range. Rocks of the Erebus Volcanic Province, a part of the McMurdo Volcanic Group, are exposed on two ridges on the northern flank of the mountain, the western Riviera Ridge and the eastern Hurricane Ridge.
Several pyroclastic deposits were mapped on Mount Morning, most of them monomict. However, one outcrop of a poorly bedded lapilli tuff, on the upper slopes of Riviera Ridge, contained a great diversity of lithic clasts. These clasts include phonolites, basanites, basement rocks and crustal xenoliths. This deposit was chosen as study area because of the range of clasts that provides a lithological cross-section through Mount Morning, from basement to phonolites.
Volcanic rocks include basanite and phonolites clasts, phonolite flow stratigraphically underlying the lapilli tuff, and glass shards from the eruption depositing the lapilli tuff. These rocks are derived from the main eruptive sequence on Mount Morning. The phonolites show a variety of fractionating stages, which is interpreted to be due to crystal fractionation, and possibly re-incorporation of fractionated crystals in a zoned magma chamber during eruption. The glass-shards represent the most evolved phonolitic magma reported from the mountain. The phonolites are thought to have been derived from crystal fractionation from the basanite magmas.
Crustal xenoliths found have a variety of origins. Crustal xenoliths include; nepheline syenites that show the same chemical characteristics as the phonolites; a syenite derived from a silica saturated sub-volcanic complex; and a biotite gabbro that has its origin outside the McMurdo Volcanic Group. The biotite gabbro is derived from a hydrous magma, possibly of an arc origin.
A fenite xenolith was also found as a clast in the lapilli tuff. It is a result of alkali metasomatism of a granitic protolith, possibly beneath Mount Morning. Fenitisation has not been reported from southern Victoria Land before. The protolith, possibly a granite outcropping at the base of Riviera Ridge, similar to the Granite Harbour Intrusives from the Transantarctic Mointains, is made up of quartz, alkali feldspar, plagioclase feldspar and mica, all of which have been altered to varying degrees by fenitising fluids rich in Na (with some K). Along the edges of the grains, plagioclase and alkali feldspar have altered, quartz has dissolved, and mica has been both recrystallised and been replaced by Na-rich members of pyroxene, amphibole, and both Na and K rich phases of feldspar. The presence of anastomosing veins crosscutting a plagioclase feldspar grain indicates the presence of a strong acid, possibly hydrofluoric acid (HF). Fluorine has been found as fluorite in a xenolith from the lapilli tuff, and this is an indicator of a fluorine environment beneath Mount Morning. 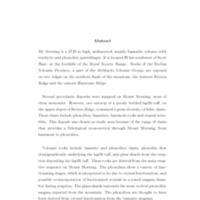